The Importance of Redundancy in your Business Continuity Plan 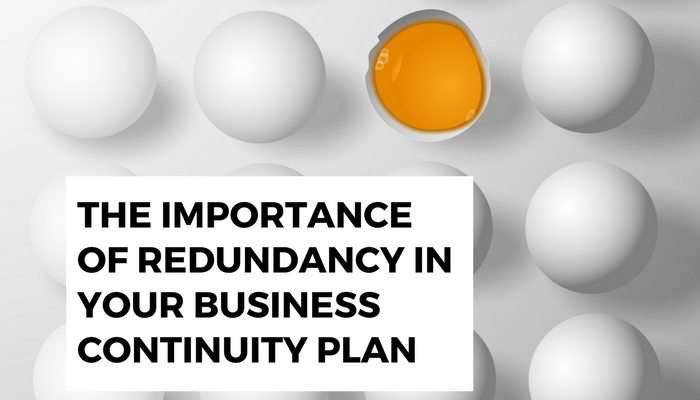 We usually want to avoid redundancy. It’s saying the same thing over and over. It’s repetitious and repetitive. But when you need reliability and safety, redundancy is exactly what you’re after since it avoids single points of failure. When you give a neighbor a spare key if you lock yourself out, that’s useful redundancy in action.

People expect websites to stay up all the time. In the first quarter of 2016, 70% of the top 100,000 websites had 99.9% uptime or better. They do this with redundant systems. Lack of redundancy can kill a business; more than half of the businesses that lose all their data fail within six months.

Backup resources are important on many levels. Data servers should use an uninterruptible power supply (UPS) so that when the power company’s delivery stops, battery power keeps the machines running. Computers can reduce the chances of file loss with a RAID array (Redundant Array of Independent Disks). (It’s only fitting that the term “RAID array” is itself redundant.)

A data backup is a stronger form of redundancy, and an offsite backup is better still since it doesn’t have a single geographic point of failure. Good cloud backup services store data in more than one site, giving even more protection. Restoring lost data takes time. To avoid downtime while this is happening, more than one server should be available for running the service. In a load-balanced configuration, two or more servers share the incoming requests, and either one can run by itself when necessary.

A data center’s network connection is another potential failure point. Setting up fail-over to the cell network when the connection goes down can improve its percentage of up-time. Bandwidth may be lower during the fail-over, but at least it won’t go away completely.

The term redundancy is often confused with backup or copy. Although the terms are similar, the purpose of a redundancy is more than merely creating a copy of data. Redundancy aims to prevent any disruption of system operation in the case of a technical malfunction or disaster, thereby maintaining a continuity of service.

There are three basic types of redundancies available on the market to make sure the continuation of service during technical malfunctions. They are data redundancies, network redundancies, and power backup systems.

Most business professionals are familiar with data backup solutions such as external storage drives or even paper “hard copy.” However, these are not necessarily designed to support service during system failures. A redundancy solution for data that will offer a continuity of service would be more along the lines of a cloud backup service. With a cloud backup, your data is hosted on remote servers and is therefore immune to any malfunctions or disasters occurring at your business locations.

The equipment that keeps data communications flowing within your network is vital to your business and, unfortunately, subject to occasional malfunctions. To make sure the continuity of service in the event of equipment failures, it is necessary to install redundant network devices such as more routers, switches, and hubs. Also, it is often best to use two internet service providers to make sure the network will stay up in the event of an interruption of service from one of the ISPs. Having two ISPs, known as load sharing, also minimizes network congestion when both services are operating normally.

A power outage could be a total disaster if it takes your network down with it, but it is also relatively simple and inexpensive to keep the network working in such situations. A common redundancy solution for this potential problem is an uninterruptible power supply (UPS). The UPS is always connected to the network and will continue to supply power from a battery backup system if the main source of power goes out.

In the face of all the myriad types of disasters that could undermine the operation of your business, you will have much greater peace of mind knowing that these three types of redundancies are in place to safeguard your network.